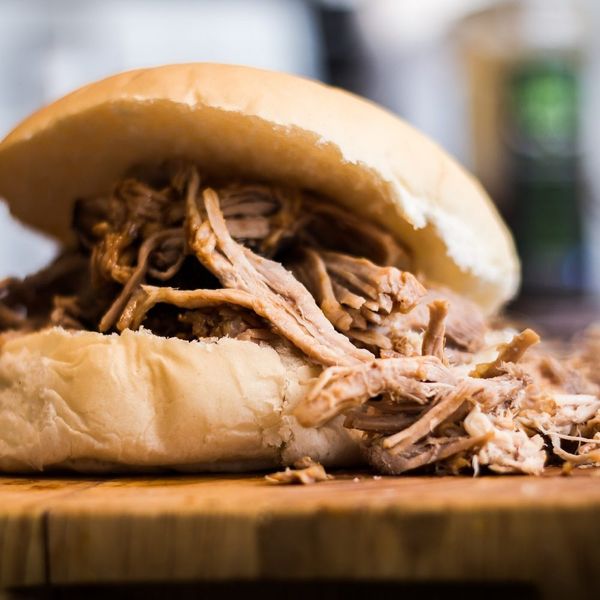 The Boston Butt is one of my favorite meats to BBQ. The versatile of the meat after its done leaves me with weeks of; pork sandwiches, pork nachos, pork tacos, pork/mac and cheese, and pork and beans, if I kept going I would feel like Bubba from Forest Gump.

Where on the pig is the BUTT?

Answer: it’s the pig’s shoulder. During 1700s in New England this piece of meat was not a prized cut. Butchers would pack tough cuts of meat into barrels to be shipped and stored. The barrels were called butts. Hence the name Boston Butt. The shoulder usually weighs 12-18lbs and consists of two portions the upper portion and the “picnic” which is the lower portion. The upper portion is usually 6-10lbs and contains a portion of the shoulder blade. It comes either bone in or boneless. The picnic cut usually weighs 6-9lbs and contains part of the foreleg typically with skin on. The meatier portion is skinless.

When you get your butt whole or trimmed; bone in or boneless there is a little prep before you can smoke it. Always inspect the meat and cut out blood clots and dangling fat. Just clean it up. Pat the butt dry with a paper towel so it’s easier to handle. It’s now time to inject the pork butt with Kosmos Q pork injection; using apple juice as the liquid. I move around the butt injecting every square inch on all the sides. I will then rub a seasoning usually Pappy’s Seasoning generous on all sides. After that cling wrap the shoulder and refrigerate overnight. This helps the seasoning to penetrate the meat and let the injection soak in.

Setting up the Smoker

My weapon of choice is the WSM can’t beat good ole charcoal. Start by filling your water pan all the way up using flat Pepsi but other liquids will work fine. Start up the charcoal using the Minion Method. You want to shoot for a pit temperature between 220-250 degrees Fahrenheit. I always use pecan wood for my butts, but refer to the smoking wood article to get other ideas.

Once your smoker is setup and stabilized at 220 degrees Fahrenheit it’s time to get the meat on. You can throw it on cold or let it come to room temperature but when the smoker is ready get the meat on. I’m usually so excited I go from fridge to smoker. If your shoulder has a fat cap keep it up; as the fat renders it will soak into your butt making it even juicier and flavorful. Always probe your meat because time in BBQ is irrelevant the temperature will tell you when it’s done.

Pork butts are tough cuts and shouldn’t be treated like a tender cut. You must cook the pork butt through the doneness in order to convert the collagen to gelatin. Of course you’re losing moisture when your cook to 190-205 degrees but all the fat you render will make up for that. During the cook there will be a time where it seems your pork butt stalls and holds temperature. This happens in the temperature range of 150 to 170 degrees. Don’t worry this is where the magic happens. This is the point where the fat will render so leave that lid down and sit on your hands. When the temperature reaches 165-170 this is the time you can make changes. I like to wrap my butt at this time; you can also finish it off in the oven at 300 degrees. If you can’t wait any longer at

Ask any pit master the favorite part of pulling pork butt is pulling the shoulder blade out. It’s so satisfying to effortlessly pull a clean bone from the shoulder. I will use a pair of silicon gloves to get the meat off the pit and put it in a pan with at least an inch lip. First remove the fat cap you don’t want to mix this in the meat. Then pull the bone out. Some people will separate their meat from brown and bark. I like to mix it all together. So get your hands in there and start tearing it apart.

When taking into consideration of trimming and shrinkage; when cook a pork butt typically produces 40-60% of edible meat. For example an 8lb pork butt will usually produce 3-5lbs of meat after cooking and trimming. If your cooking pork butts for a group of people, figure 4-6 ounces per sandwich. Assuming 50% meat of 8lb butt will yield about 16-4oz sandwiches or about 11-6oz sandwiches.